This is the third in my series of articles on "How to Get Small" in assembling a professional photography kit. I've always enjoyed the challenge of doing more with less, and it's been particularly on my mind over the past year as I've spent a lot of time in faraway places, flying with laughably small luggage allowances, encountering unexpected gear-intensive photo opportunities, and exploring on foot or in crowded vehicles.

I'm primarily a location shooter, which means that I work wherever the photos are happening. As such, I often have to lug lighting equipment hither and yon. And, while some of my work, such as portraiture, can be done at the more leisurely pace enjoyed in a studio, much of it requires rapid setup and breakdown. In addition, I often don't have ready access to electrical outlets. So, I've long used small battery-powered hotshoe flash units as mini studio lights on stands to light a stage, a meeting, a portrait set. Sometimes, though, I need a little more power, like when I'm lighting a large group of people. My old high-power workhorses didn't allow precise or remote adjustment of output power, so when their heavy batteries started failing, I looked for a modern replacement that would offer more flexibility and less weight at lower cost. 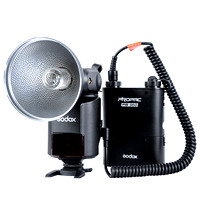 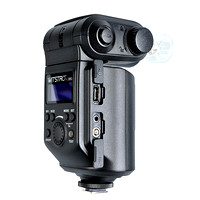 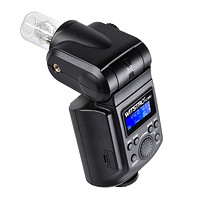 Godox to the rescue with their Witstro AD360 (sold and warranted in the US as CheetahLight CL-360, Flashpoint StreakLight 360, Strobies Pro-Flash 360 and Bolt VB-22). This flash produces roughly 360 Watt-seconds, four times more power than a good hotshoe flash, and it still fits easily in a carry-on-size rolling backpack with the rest of my cameras, lenses and flashes. It recycles faster than my old workhorses and runs all day on one battery. The flash weighs only about twice as much as a standard hotshoe flash, and the battery + pack is much lighter than my old workhorses. So, size, weight and performance are great.

A few other qualities make it a real treat to work with. First, power can be adjusted in 1/3-stop increments down to 1/128, so I can get just a tiny wink of light when needed. The big, easy-to-read display and the streamlined user interface make this simple. Second, the exposed flash tube cools much faster than a hotshoe flash head and evenly fills an umbrella, softbox or beauty dish with light. This uses power more efficiently, enables rapid high-power shooting without overheating, and produces softer, more even light on the subject. In short, this thing is great for use with mods. Third, Godox' FT-16 radio triggers trip the flash remotely and also let me adjust the output power from the camera position without ever having to walk over to the flash. When I've got a flash positioned 100' away on a balcony at a big event, this is a godsend. There are fewer batteries to manage, too, because the receiver is powered by the flash. 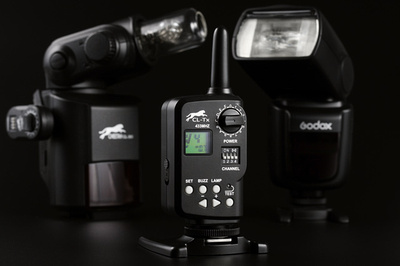 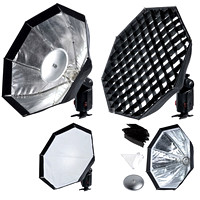 I haven't put a lot of miles on mine yet, but it feels impressively solid and sturdy and has worked perfectly so far on portrait and product shoots. There are some really nifty, compact and well-priced accessories for it, too, such as the AD-S7 19" combination beauty dish and octabank which is extremely versatile and packs down small enough to fit inside my rolling backpack. The AD360 sells for around $500, an FT-16 trigger set goes for around $40, and the AD-S7 is a must-have at $50.

Finally, a few words about the AD360's smaller brothers in my kit. I really like my Godox V850 hotshoe flashes for many of same reasons: fast recycle, solid construction, precise power control, a high-capacity li-ion battery, and FT-16 radio triggering. The removable internal li-ion battery is much easier to manage than the 12 AAs I'd need for a conventional hotshoe flash. And, the triggers let me adjust and trip the V850s along with the AD360 as an integrated system. I can't believe they only cost $130. 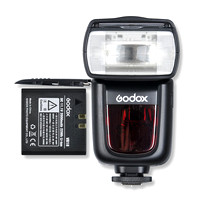 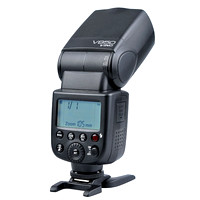 This combination of gear gives me a very flexible and compact kit that provides plenty of power, greatly simplifies battery management, and packs into a super-portable package.

You can find other reviews of these flashes here:

Jacques Cornell Photography
Mariosch,
I couldn’t reliably comment on how closely the AD-S7 mimics a beauty dish, as I haven’t used beauty dishes very much and I haven’t paid very close attention to the comparison. It seems obvious, though, that the catchlights in the eyes will be octagonal, nor circular. I mainly use the AD-S7 as a small octa, and in that role it serves well. Given the low cost and the great convenience of this little mod, I think it’s a great addition to a location kit, even if it’s not exactly the same as a metal BD.
Mariosch(non-registered)
I realize this is an old blog post, but hopefully you're still monitoring comments here :)

I'm very interested in the AD-S7 beauty dish / octa combination. Especially for use as a beauty dish.
A lot of these "beauty dish type" modifiers do not produce the same light as a real beauty dish, though.

How's that with the AD-S7? Is the light anything like a real beauty dish light?

Best regards,
~ Mariosch
Jacques Cornell Photography
Mic,
I’ve measured the output from my AD360 barebulb flash and a V850 hotshoe flash mounted in a double-diffused 37” octa. With the V850 zoomed to 28mm, the difference was 1-1/3 stops, but the AD360 produced a more even spread of light. With a white dome on the V850, both flashes produced an even spread, but the V850’s output was down about 1/2 stop, yielding a 2-stop difference.
Mic Ty(non-registered)
Hi Jacques. Thanks for posting this review. I'm curious about the real world power of the AD360 compared to a speedlight. Can you test how they each perform in a softbox? I used to have a Quantum X2 (with PXC, i.e. 400ws) and I found it to be somewhere between 3 to 4 times as powerful as a Nikon SB-800, depending on which kind of modifier was used, tested with the Cybercommander's built-in flashmeter. I'd like to know how the Godox performs.